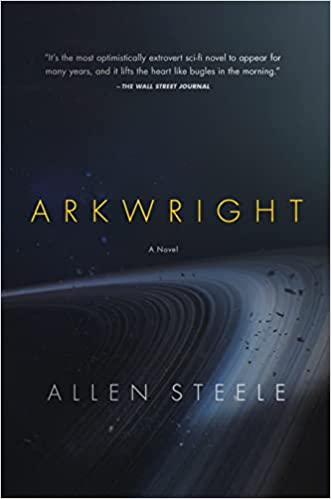 Written by a highly regarded expert on space travel and exploration, Allen Steele's Arkwright features the precision of hard science fiction with a compelling cast of characters. In the vein of classic authors such as Robert Heinlein, Isaac Asimov, and Arthur C. Clarke, Nathan Arkwright is a seminal author of the twentieth century. At the end of his life he becomes reclusive and cantankerous, refusing to appear before or interact with his legion of fans. Little did anyone know, Nathan was putting into motion his true, timeless legacy.

Convinced that humanity cannot survive on Earth, his Arkwright Foundation dedicates itself to creating a colony on an Earth-like planet several light years distant. Fueled by Nathan's legacy, generations of Arkwrights are drawn together, and pulled apart, by the enormity of the task and weight of their name.

This is classic, epic science fiction and engaging character-driven storytelling, which will appeal to devotees of the genre as well as fans of current major motion pictures such as Gravity and Interstellar. (Google Books Summary)