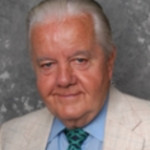 Eugene F. Diamond, MD, (1926-2021) was Professor of Pediatrics and Past Chairman of the Department of Pediatrics at Loyola University Stritch School of Medicine. He was Visiting Professor at Rush Medical College from 1967-69. He was a member of numerous organizations including the American Board of Pediatrics, the American Academy of Pediatrics, and the Midwest Society for Pediatric Research. Dr. Diamond held Presidential positions at the Catholic Physician's Guild, Illinois Academy of Pediatrics, World Federation of Doctors Who Respect Life, Calumet Branch of Chicago Medical Society, St. Francis Hospital Staff, National Federation of Catholic Physicians' Guilds, and Illinois Family Institute. Dr. Diamond was a Distinguished Fellow of The Center for Bioethics & Human Dignity.

Dr. Diamond received his MD from Loyola University and his pediatric training from the University of Chicago. He received various awards including Pediatrician of the Year-Illinois Chapter, American Academy of Pediatrics, in 1980; George Award in Clinical Pediatrics in 1981; and Summerhill Award from Birthright International in 1995. An accomplished writer, Dr. Diamond has published several books including The Large Family: A Blessing and a Challenge (Ignatius Press, 1995) and Aids and the Contraceptive Mentality (John XXIII Press, 1985).

Dr. Diamond was married and had 7 sons and 6 daughters.